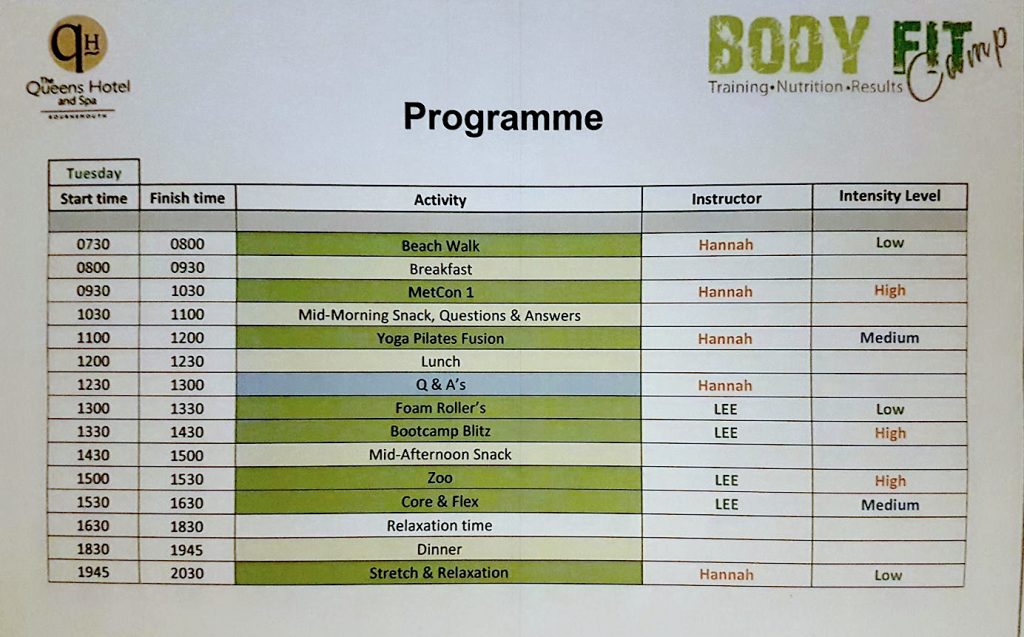 Day Two … How to Wins Friends & Fuck People Off

So having staggered back into the hotel, collected my parcel from reception… I was showered, getting my breathing under control, and squeezing myself into to some pretty unusual clothing ( For Me)

I had Not Gone Lycra ( FFS What is it with 50 some thing males, On Bikes In Fucking Lycra!!! ) but I felt just as conspicuous…  apart from the lack of bell end helmet, I felt a total twat… and wobbled down to breakfast. 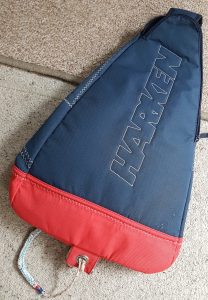 I took my Harken Bag with me, it is a small duffle bag type of thing… if ever you see me with it in a hotel dinning room at breakfast… just know, I am “on the rob” !

For such a small discreet bag, it holds a huge amount of fruit!

So in I waddle… up to The Boot Camp Buffet… Seriously… apart from fruit and and seeds nothing Slimming World Friendly at all.

I was sticking to my commitment to Judi and was being as bright and happy as possible… but this was testing.

Luckily one pf the coaches walked in right then and I said :

“look I know the Boot Camp Breakfast Buffet is this … but could I please have 4 pieces of bacon, I will cut the fat off add a poached egg and I would be the happiest person alive”

She was lovely, understanding my need for continuity she absolutely gave permission for me to help myself from the main buffet… I had a meagre breakfast for me, 4 rashers of bacon and slice of dry wholemeal toast.

( SNAG ALERT… Hannah did NOT share this conversation With The Management!)

I then snaffled a bushel or two of fruit, and went off to class one.

Little did I know The Time Bomb I had just set ticking… talk about fucking people off! Oh My God ! #bacongate!

Look I am not going into specifics here, I am sure you are pissing yourself thinking of Tubby here trying to get into … what was it? Foam Rollers and Zoo! Yes yes Hilarious, BUT do you know what I gave it a go… I was drenched after every session … really sweating for England, Gold Medal Position.

I mean can you imagine how I felt, surrounded by slinkys and, flexible Barbies, ( no Disrespect meant here, some of these girls/ Women had more flex than the leaders… ) I was struggling just trying to get my legs together and NOT FART… I certainly learnt Muscle control, I can tell you!

It was so hard not to,  fart I mean … and the more the week progressed  the more veg based my diet grew, the more productive my arse became…

The Only Classes I missed were the circuits and the second kettle bells… these really hurt my shoulder.

During these classes I went down to the Gym and got back into the rowing machine and the bike… I mean I really took it seriously.

I was quietly getting into this, and, enjoying it…

Look before I get into the whole #bacongate scandal, let me tell you about stretch and relaxation…

I was dreading the second day, you know what it is like…

Do a lot of exercise today and you can hardly walk tomorrow ( or the rest of the week if you are me!)

So evening Stretch and relaxation sounded much like more of the same… but I was so wrong..

The Guys took us through a series of exercises and movements more akin to Tai Chi than anything else, then through some light yoga, followed by a short meditation… I am into Meditation ( Now ) as can be seen here … and this totally set me up for a great nights sleep … and a huge revelation in the morning … NO ACHES AND PAINS…

I fell in love With Yoga right then … right there

I spoke to waitress and asked for 4 rashers of bacon, as she went to fetch those I went to the buffet on a fruit hunt and for my slice of toast.

When the poor girl returned from the kitchen, she looked terrified… she timidly told me that the bacon was not part of my package and I was prohibited from having it. I pointed out that the coach had OK'd it but she said that the Manager had intervened and I was NOT allowed bacon.

So many others were having things like smoked salmon and poached eggs, kippers, goodness knows what else… completely Off Plan … But Bacon there was to Non   Zilch

So I ventured out to  reception and asked for the manager.

This Young guy ambled out and said Yep? 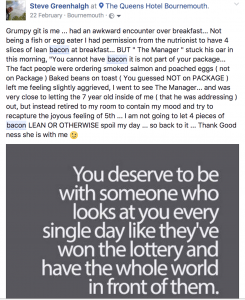 I tried to explain my position regarding, Slimming World, Syns, Free Food Types and my Conversation With the coach… All to No Avail

I have never been spoken to so badly, I felt incredibly stupid… I tried really hard to not unleash my inner 7 year old… but it was intensely difficult.

The only thing stopping me … was the happiness she was getting, and to be fair I was having fun too,

I never got my bacon, but I reckon I made up for it in terms of the free fruit, the extra milk I snaffled to take upstairs … non of which were on package… but all of which I availed myself of.

It is a damned shame the Manager was so confrontational, there was truly no need.. but I had held it in and was able to make the best of the week with Judi.

Never Look Back and Start Winning 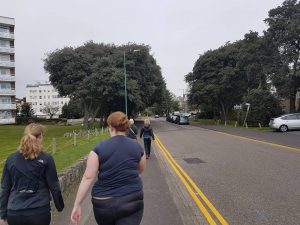 After #Bacongate, I just got on with it. I went to every class I could cope with, and went down to the gym at every opportunity.

I got on with the walks and really started to improve… on the last day I finished 5th out of 20.

I never consider myself to be competitive, I just wanted to get better for me and for my long suffering wife.

we had reverted straight away to Normal Portion size…

THAT HAD TO STOP… we had survived very well on meagre rations … so out came the small plates.

We also walk every night before bed… a good brisk walk around our village.

I also row every day ( as scheduled ) and keep my self accountable on my Facebook page… it all helps and it is all part of the new and modified habit regime that I have worked hard on.

I Am Never Doing This Again

I have said this in “Group” at Melbourne, I said it at the Boot Camp. Once I am at Target I will never let it go again.

I stopped smoking twice, and I thought that was hard. In comparison I think this and smoking cessation are about equal.

I know having done one I can do the other. BUT I will not do it again.

The Number of people at The Bournemouth Hotel who had been before, and come back 10, 15, some of them even 30 pounds heavier than they had been when they left last time., I find frankly mind boggling.

Having found the way to curb my eating and have a healthy weight, I can assure you that with the Group support I will never go up massively again.

Self Belief And More

Self belief matters, but in this endeavour, some what like AA, (Alcoholics Anonymous) I truly believe that belief in and an understanding of the system is crucial.

A feeling of belonging is more important than just accountability. Being on the social team at Melbourne ( all right I sell the raffle tickets !) gives me a sense of belonging, a reason greater than my own weight loss to turn up.

I truly believe without that belief in the system and the feeling of belonging I would not have succeeded as quickly as I have.

Anne and Paul assured me with discipline that I could achieve what I set out to do … 36 Inch waist by August!

Me, I was just dumb enough to believe them, and so I put the work in accordingly.

After My first weigh in after Bournemouth I lost 3.5 pounds… I was really pleased and my belief level soared. 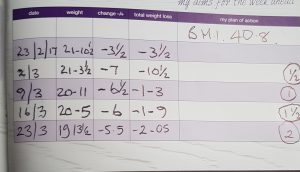 I believed I could … So I did…

I made steady and lasting changes to the habit cue and reward loops that surround my eating.

I am NEVER going back to Mr Fat Bastard… it is too hard to achieve… so I am staying healthy.

ext read about my trip to Malta

and the continuing weight loss regime