Seriously mate, I'm a lorry driver, I ain't got time for that shite!

In a 15 hour working day do you seriously, SERIOUSLY!  think I can sit and think for 20 minutes 1/2 an hour?

That I am sure, is your response. It was certainly mine, until the last few years that is.

I don't know about you, but speaking personally I have found the roads to be filled with an ever increasing number of dolts, imbeciles, and Twat's, and that is being polite about it.

My day was filled with abuse ringing in my ears, foul language filled my head, and my cab and my blood pressure and stress levels soared.

I was on target to die in an accident, or simply from a heart attack with all the shouting and screaming,

I really didn't think I would survive very much longer, the roads were full of intolerant, selfish, thoughtless idiots, whose sole ambition, however much danger they caused, was to get in front of the lorry,

To “Nip In That Gap” at the lights.

Some one suggested I learn to meditate…

“What?” I was incredulous …”How Long For?

Oh at least 20 minutes a day came the response… 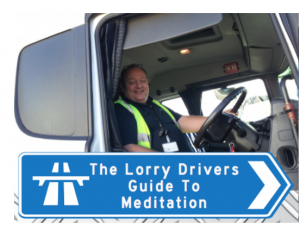 I Gave It A Go

I really felt as though I should be so much further on. I went to an event, a Momentum Day… you know one of those days you go to, in the hope that some one says something, that you can implement, that gets you moving, to do something…ANYTHING! Just take action!

In all honesty I was scared shitless that I was letting an opportunity slip through my hands, but felt completely bogged down in my own crap.

So there I am sitting there, when this svelt, ( skinny to you n me!) healthy, young man, starts to talk. He talks about balance, living in the now, living in calm, living in a way that you are at peace with yourself, being grateful for that which you already have ( we all have so much, I sometimes feel guilty for wanting more).

He picked each my fears out the air, undressed them, and showed me what a tiny kernel of truth was hidden inside. He destroyed those fears, almost brutally. He did not embarrass me, but I felt strange, touched, some how moved in a way that I had never been moved before.

I Know This Sounds Weird ~ I Am A Truck Driver, HONEST

But, it got me started, started on a road to discovery … this road nearly hit the buffers early, because I rushed home and shared with my wife “What Stuart Said”… Well why don't you go and live with Stuart, was the disgruntled response from a strained and rather upset spouse. She who had just had a nightmare day with 4 children, whilst I was off swanning around the Holiday Inn … any way enough of that …. 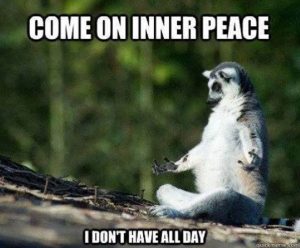 I started to meditate, at home in the evenings. I was facing some difficult times in my life, within my relationship with my wife. A good friend had bought me “Unsinkable” By Sonia Ricotti, and as part of that book came morning and evening meditations.

You don't say! I know strange right, 6'1 truck driver, 6 inches to short for his weight, pulling the cab curtains during his break to meditate for 15 minutes rather than go to the burger van and moan and bitch about

But do you know what, in the last 6 months I was on multidrop, not only did I meditate for 20 minutes each morning, and the same in the evening. I also took a 15 minute driving break and did the same during the day.

Now did all this cure the idiots on the road? No of course it didn't, but what it really did do was help in my reactions to them.

I remember in the old days, if my wife or kids phoned me for help and I was driving (Hands free kit and blue tooth used… PROMISE) the conversations were interspersed with profanity from me. I could not help it… you can imagine can't you…

And so it would go on, my screaming at other road users whilst on the phone to my loved ones

That side has virtually gone, now I just calmly ask the “other driver who appears to be in a rush” (yep ok IDIOT…)

I only had this conversation out loud once, and the woman in question burst into tears. She felt I was being aggressive… hells teeth she would have died if I had spoken to her two years ago…

Will It Work For Me?

Is no doubt the question in your mind, or possibly Ball Cocks!

Well if either of those is your response, then you are right.

If you want to change how you respond in stressful situations, for your own health and well being, then I would seriously recommend you try meditation. If you said Ball Cocks, then this certainly will not work for you, and that is cool too.

I am fortunate in that as part of the holistic business program I use, there is an in house meditation. On-line sessions are led by a super special lady, you could access these meditations by joining that system.

However to get going NOW ~ I would suggest you search for the “Calm” App on either iTunes or Google Play, search “meditation” and it will show up in the search results. I do not have an affiliate link as it is a free app ( YES FREE, F.O.C. No Charge!)

The App will help you get started, in 3 minute bursts, ( Seriously do you not have 3 minutes?)

I really am grateful for the time I spend in quiet contemplation.

It has taken me from being a stressed out monster, angry with the world, my children, my wife even. To some one who has the time to listen, to them, but most importantly to himself.

but I sincerely hope more of you find the benefits, as I did, eventually.

Have a great day

PS … If You think this is bad … just wait until I introduce you to yoga!  lmfao