The Truckers Guide To Weight Loss

So Where Are You ? 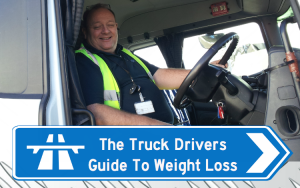 Stuck In A Truck?

If you can relate to any or all of the above, and you are still happy living as you are, then this website will be of no further interest to you.

If ( as I suspect) you relate to that list and want to do something about it…. please read on 😉

I was absolutely NOT happy. I told everyone I was,

Even when I had to go the Doctors and she said you know you are overweight? ( No Shit Sherlock!) I replied

Oh how we both laughed!

I was getting by. I had enough life in me to supervise loading. I let my second man do most of the grunt work, whilst I kept myself convinced I was the important one who had the difficult job of driving.

I shunned any physical activity … and usually need three shirts to get through the day.

I drive a converted MAN Tractor Unit with twin 800 litre tanks. I was asked how long it took to fill with diesel once… My reply?

I was convinced that I could lose weight, just could not be arsed to put the effort in …

I had a slight drinking problem too… I could not get drunk… I know huge problem right?

I would regularly have 6 + cans of Stella a night. (5% Dutch Lager, sometimes called wifebeater!)

I then started adding shots TO THE BEER…

So pint of stella with a double Jaeger IN IT!

I really was in a bad way…

I regularly stopped drinking for at least a month to make sure I could … My dad had been a functioning alcoholic, and I had lived with him as he destroyed himself. I really did not want to go that way so I always went dry for January and kept off it till my wife's birthday in March. That normally involved me loosing a couple of stone… BUT I was still over 23 stone, and  at 6'1″

Last May I had to go to New York, on business.

[ I started an online marketing business in 2012, after an industrial injury kept me off work for nearly 2 years. That is where I learnt about websites, and Facebook and I make money linking customers, to service providers, sort of the digital middle man. If you would like to know more about that check out another of my websites here ]

I had always wanted to go to New York, see the sights, and feel part of it.

The trouble started when I boarded the plane.

I could NOT do my seat belt up! It was literally too short. The poor sod sitting next to me was in trouble too.

“Oh that's ok happens all the time “… and went off for a seat belt extension… who knew they even had them? …

That may not bother you … but it upset me, I love fairgrounds and rides like that … and I was TOO FAT! 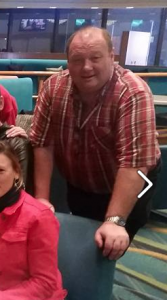 I kept myself pretty quiet through that function, and tried to stay out of camera shot… but I was snapped a few times…

Worst of it was, I had put myself a day spare to see the sights, but I just could not be arsed to walk anywhere and so stayed fairly central and ate… I can show you several Great pizza restaurants and bars near “Time Square”… but the only thing I actually visited was Ground Zero, which is actually very humbling and incredibly sad.

On the flight home, when, by the way I asked for an extension as I boarded the plane.

I vowed that I would never ever need a seat belt extension again …  In the past that has meant just stopping doing what I had planed to change … but I knew I was Flying again very soon.

Look away Now If You do not like the “D WORD”*