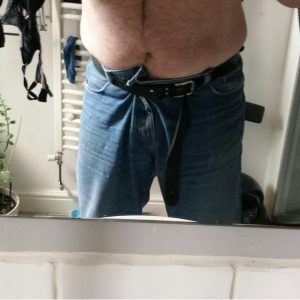 So did I get on the plane with no extension?

I had worked hard, started to curb some of the excess, and really got on top the snacking…

I comfortably told everyone I would be in 36 inch trousers, by August 2017, not just that … but I would have to have a taylor reduce the waist by an inch as I was going to be 35 inch waist!

Not too bizarre and certainly achievable…  all I had to do, was maintain this new regime and the weight would fall off!

I had bought new clothes for Vegas I felt I was in control … Still in Jacamo xxxxl mode… I felt good.

Imagine my horror when I 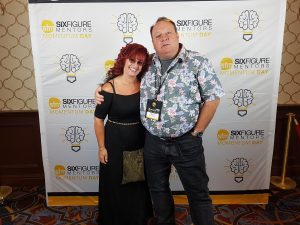 Yep The Bloody Extension came out again! I was devastated, not beyond consolation, just upset… it dinted my confidence..

Back To The Dark Days

So I slapped a happy smile on my face, and just got on with life… but I was gutted.

I really thought I had cracked the weight thing…God

I still kept telling myself that I would be wearing 35 inch trousers for Sarah's wedding… but I didn't believe it … it was like a switch had flicked, and any desire or belief had just been snuffed out.

I didn't get on the band wagon of stuffing my face, at every opportunity, but neither was I actively trying to slim down…

We started dancing around this time and that above anything else kept me motivated and frankly was the only exercise I was getting.

The Video shows me in all my glory

What it really doesn't show is the pure joy on Judi's face… it is strange, we have been married 30 years this year, and when we first got married we went to learn to dance… but shit got in the way and we only managed three lessons.

Now we set this dance night as a major priority… we never miss it, EVER, and the main reason for that is the joy it gives my wife.

Do not mistake me I love dancing too, and as I have slimmed down, I have started to enjoy it even more… but the sheer joy it affords Judi is incredible and I would go every week even if I hated it… just so she could be happy … she really deserves it …

Any How… Back To The Weight Loss

I have been involved since it's beginning, with a little Facebook group, for Truck Drivers in UK,

“For Drivers, By Drivers”,

Markedly different from most drivers groups.

We are strict on the “point and laugh” mentality, prevalent in most groups…

All drivers are welcome. No one is precluded, and if anyone starts a slanging match or bitch fest, we lob em.

Now at the back end of last year we had a get together, in Blackpool… you can imagine probably, 30 plus truck drivers set free for the weekend in Blackpool!

#Messy doesn't quite cover it… but amidst all that mess we had a great time… and I met my saviour.

A fellow Driver Ian Alexander,   “Zander” to his friends ( SIR, to everyone else!)

Ian cannot object to me saying he is big!

It is not an insult … Jonna Lomo was Big,

Zander Makes Jonna look like a kid! Ian is on the left in this picture. 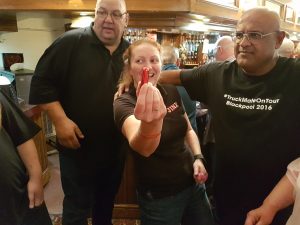 What he did for me, was give me hope.

not actually blocking the light out at my daughters wedding .

You See Ian is a member of “Slimmingworld” …

To say I was dismissive… is an understatement … how was I going to be able to do all I needed from the truck?

So what excuse did I really have?

It was another Arthur moment, Ian just took all my excuses away…( HATE THAT )

“Do you mean to tell me you go a village hall with a bunch of Big Women and get weighed every week?”

I was incredulous… I thought I was better than that ( what a twat honestly! ) I was sure I had the answer …

So I had another beer and just carried on screwing up! 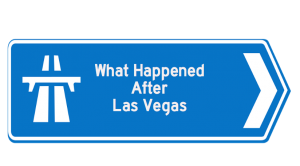