So I knew I had a problem…

In this picture I was on shirt 3 of the day and I had only walked up a flight of stairs!

How had I been able to do this to myself?

One Bite at a time is how.

I could see Arthur could achieve more and he started with far greater disadvantages than I did.

Yes OK I had had a couple of industrial injuries, in the past… but nothing on Arthurs scale.

I asked my wife for help.

I got her to try and keep me accountable

My Daughter is getting married in August 2017, and so we established some pretty tough goals for Dad to achieve.

I have never been relaxed with other people imposing their choices on me… so with something this personal, I had to call the shots other wise I would never have got started.

But by sharing these targets with the family I was able to be kept very much on track.

Not surprisingly I had to cut back on my drink intake, I was really dreading this as I was pretty sure I was verging on full blown alcoholism… well I reckon I skipped that by a whisker…

Quitting the heavy stuff was nothing like as bad as I had feared… it was and is tough to have a pint of Vimto when I finish work… As opposed to 1/2 a dozen cans of Stella!

But that is far easier than being strapped into an aisle seat of a Jumbo Jet, believe me!

Have I stopped drinking ?

No… don't be fucking stupid! Of course I haven't…

BUT and this truly matters ~ When I drink now …

I am no longer drinking to forget, or to blot out a bad day… and this truly makes a huge difference.

I now drink on family occasions, or when Judi and I are out for a dance night, ( Not Tuesdays That is learning and regular, I stick to soda those nights) and I kerb my snack intake too …For years a pint of Stella or some other 5% Leveller had to be accompanied by salty snacks … peanuts was my downfall … normally added to a “squashed” pack of Salt n Vinegar crisps… consumed on a ratio of 1 snack to a pint! yes You read that right

1 pint of beer was always accompanied by a pack of salted peanuts normally added to a pack of crisps.

Standard Night? minimum 6 pints!   Are you getting the picture, and believe me I would be rock steady after that lot add a couple more pints and I would still be fine

Average intake would be 4 > 6 pints an hour… this is just a NORMAL NIGHT FFS … Can you imagine when it got messy!

OK we covered Drink … but what about the rest

I needed to curb my calorie intake

To put it bluntly … I was shoving more in my gob than could ever come out of my arse… I needed to get in control.

So we looked at meal planning and getting smaller portions organised, and we also took care to make sure we reduced the amount of food / snacks that we kept in the house… seriously I can demolish a pack of ‘Jaffa Cakes' in under 10 minutes.

It is Not something I am proud of … it just is…

I remember Judi giving me a double pack of “Jaffa Cakes”, on a Sunday night ready for work Monday…

“They should last till you start for home on Wednesday!” She would say…

By Trowell Services … both packets … GONE … and that was me setting off from Loughborough!

Regular meals is an essential, but I have found I also need something to occupy my hands when I am bored… I have a very low boredom threshold, seriously low.

We looked at my “Daily Intake” at work, well Judi thought she had

I have always packed for myself … and now I spend my time doing more day runs I pack each night for the next day.

Now in all this, Coffee, was sacred in my eyes …

“You Can Change what you want … But I am NOT missing out on my Coffee … If I cannot have a simple pleasure what is the point of living?”

OK that little list is the stuff Judi saw

What she did not see or know off was the extras

I was so regular there, I did not even have to order. Duncan would have it ready for me…

My Duncan special was

The no butter rule was of course Bollocks ~ I just hate Marg!

Just Who Do You Think You Are Kidding?

So even under the new regime I was kidding myself, obviously.

But we agreed to reduce the calories …

Now we come back to coffee, I wanted this by now, so I binned sugar and went sweetex, I went from Blue Milk to Green. BUT I felt as though I sacrificing so much, I really resisted…

BUT we got there… and as we went forward with support and encouragement. things improved.

I started Working with my son Max, and he was able to keep me on track a lot…

Trust, Honesty and The Big Deal

“Hey Dad, you really Do NOT need another McDonalds Breakfast this week,” 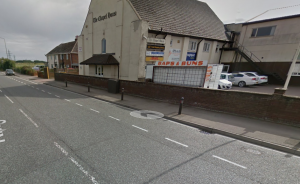 that is tough shit to take I can tell you …

especially on a Saturday morning, you have just tipped a caravan at  Killingholme, and you have to drive past the best value Road-sider in the country.

It was tough … but I was getting there…

How Were We Getting On

As October loomed, I was determined to be able to get into the seat to Las Vegas, and be able to do the seat belt up, without the need for the extension.

I wasn't doing this by weight … I was doing it by belt holes!

I know sounds weird but it was a measure I was comfortable with… I could really see the improvements… Did I get on the Plane?

Check it out here