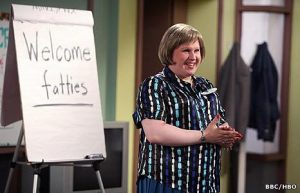 1. You will wear exactly the same thing to get weighed each week. Even if it's -2 degrees outside you‘ll be wearing a floaty summer dress and freezing your tits off.

3. There's always a Janet in the group who takes 42 cruises a year.

4. You'll save all your Syns/Points up in the week so you can neck a bottle of vodka on Friday night.

5. There's always a Pauline in group who ate 8 sausage rolls at her cousin's funeral and put on 5 pounds in a week.

6. You will not eat a thing before weigh in. Even if weigh in is at 8pm.

7. You'll praise a Susan who maintained.

9. Group leader: “You can eat a whole bag of pasta if you need to…..but you won't be able to”
You: “I beg to fucking differ Linda”.

11. There will always be one lone man called Peter in group who loses 9 pounds each week. He seems like a lovely chap but you'll all secretly hate the bastard.

12. You will be unable to poo before you get weighed. As soon as you get home….massive shit.

13. The group leader will try to tell you that potatoes cut into strips and sprayed in Fry Light are “better than chip shop chips”. This is bullshit Linda. Bullshit.

14. A new flavour of Müller Light is announced and it creates a frenzy of riot proportions.

15. Linda is no skinny cow herself and doesn't follow the plan.

I nicked this from a post on Face book   by this lady … love some of her posts and insights   https://www.facebook.com/babywipesandwine/

Have a Great Day …